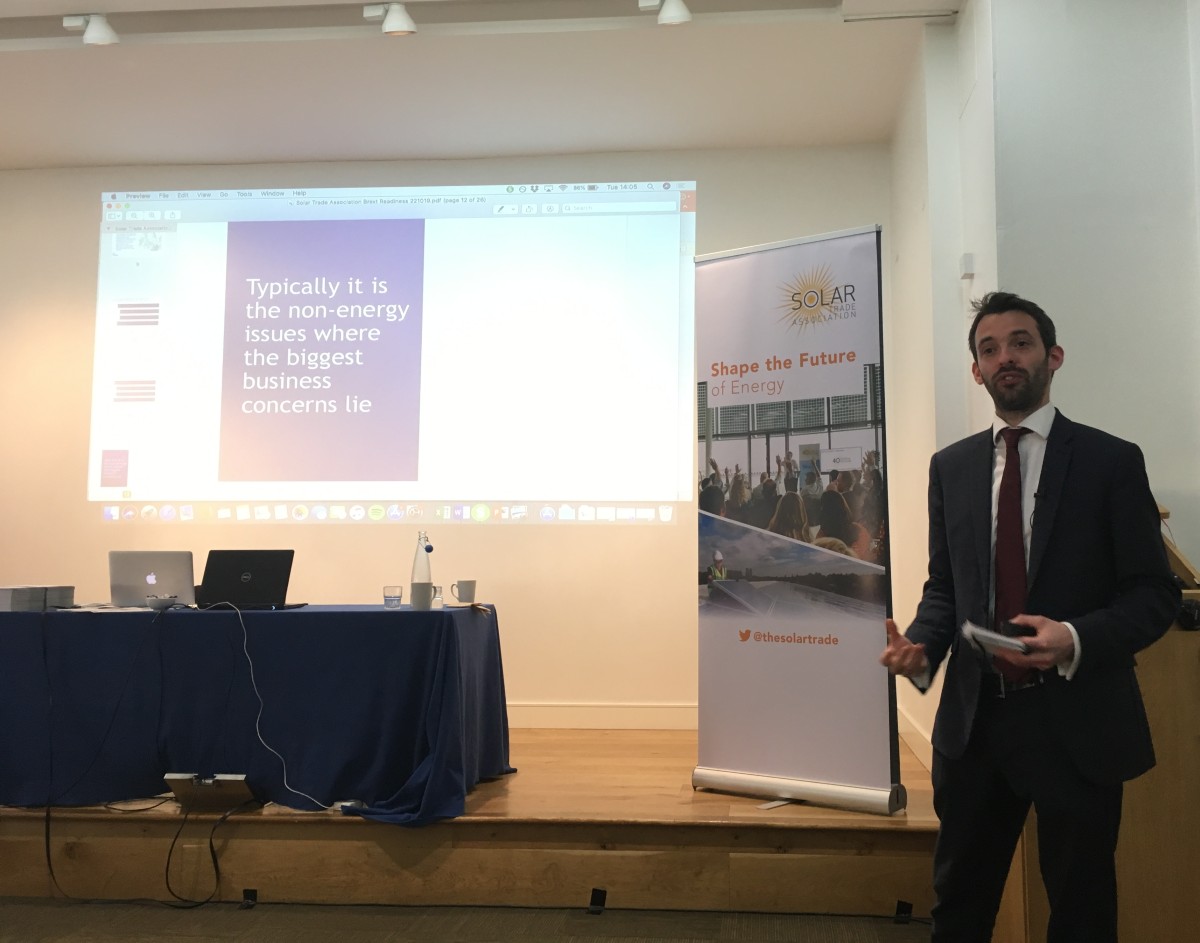 Back to news index
← Previous Next →
Brexit unlikely to have ‘major impact’ on solar but concerns on costs, imports remain

While a lot of uncertainty still remains with regards to renewables after Brexit, the growth of subsidy free solar, along with net zero and other targets enshrined in UK law, and the World Trade Organisations (WTO) arrangements should reassure the solar industry. But concerns over imports, skilled staff and growing costs remain.

This was the overarching theme of the Solar Trade Association’s ‘Renewables after Brexit’ event which looked at the economics, the legalities and the guidance that’s been provided to the solar industry by the government.

Solar, along with renewables in general, has grown substantially in the UK over the last decade. This has ensured that the technologies have moved into a much more economical space, with the levelised cost of energy (LCOE) for large-scale ground mounted solar PV in the UK expected to be 35% lower in 2030 than it was in 2014. This growth is likely to ensure that regardless of whether the UK leaves the EU next Thursday, there will be continued progress in the solar industry, although the uncertainty over this departure has caused a hiatus in investment.

The speakers did disagree about whether the UK will have to leave the Internal Energy Market (IEM) though. Sam Street and Dan Roberts of Frontier Economics suggested that only in the unlikely event that we have a Norway type deal could we stay in the IEM. They suggested that there were four types of impact likely if we leave the IEM; macroeconomic, the effect on climate aspirations, taxes and duties, and integration and market design.

However, in the last presentation of the day, speakers Elizabeth Reid and Carol Cloughley from law firm Bird and Bird said that in their reading of the political declarations there seemed to be a desire to stay in the IEM, and we were only likely to leave it if we crash out of the EU.

Throughout all the presentations, there was a lot of reassurance. Subsidies for example, will be largely unaffected by Brexit, the government has already introduced a number of changes such as the Find a Tender service to replace EU mechanisms like the Official Journal of the European Union (OJEU), and we have until the 31 December 2020 to actually implement many of the necessary changes.

A mechanism has been put in place in case we leave the EU emissions trading scheme, where there will be a £16/tonne tax on carbon.

Reassurance about the UK’s ability to import and export electricity and gas was given, as well as components, as it will largely be governed by World Trade Organisation (WTO) rules.

Under these rules there is 0% duty of electricity for example, and many other aspects of the WTO’s arrangements are in line with the EU’s. It is unlikely that the duty on gas will be high too, as the majority of Ireland’s gas comes through the UK, and it would not be in the EU’s interest to increase costs for member state Ireland.

“If you look at WTO rates they are again zero, if you look at the temporary import rates that were announced by the government they don’t seem to us to include energy components,” said Dan Roberts of Frontier Economics.

The UK will have to strike a ‘fine balance’ when trying to get EU agreements and bilateral trade agreements with China and other countries. The removal of environmental protections in trade deals in Prime Minister Boris Johnson’s deal has caused concern also.

Overall, concerns remain, as few queries can be categorically answered until there is a deal in place. But there are many areas where preparations have been made, and many aspects of the solar industry that will be unaffected.

“There’s nothing out there that looks like it’s going to be a really major impact, specifically in the solar sector,” said Roberts.